One of my favorite bodies of work is Hokusai's Thirty-six Views of Mount Fuji which include these extraordinary block prints of crashing waves. Waves have been significant to me in several ways throughout my life and though this print was done originally in the 1830's it continues to be relevant to me and many others on a daily basis. It truly transcends time. There is something so ethereal about the crashing waves that seem to be overtaking the peaceful and unmoving mountain in the distance. 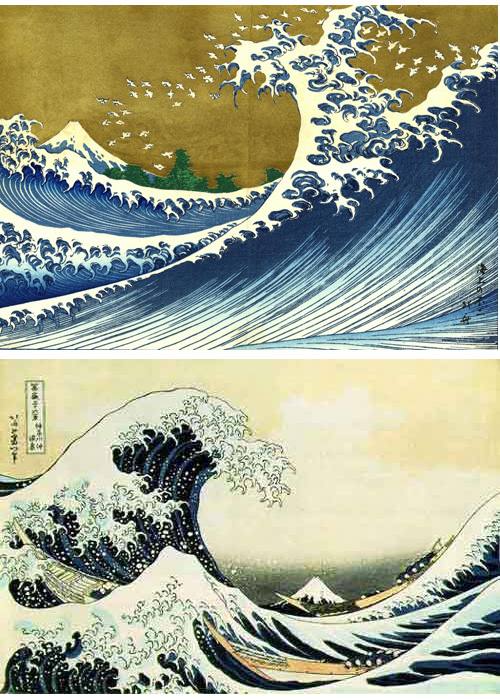 My wise friend Zena said it best after surfing in Australia, "Being out on the ocean, at nature's mercy, makes you realize that we are all parts of a greater system. There is very little over which we have control. The biggest (and possibly most difficult) thing to learn it to just ride the waves, no matter how they overwhelm and rock you. Why? Because we have no choice, they will keep coming at their magnitude and pace no matter how hard we fight their current. And no matter how much we fear them." And like the tides, the difficult times will pass, because all is in constant motion and flux. 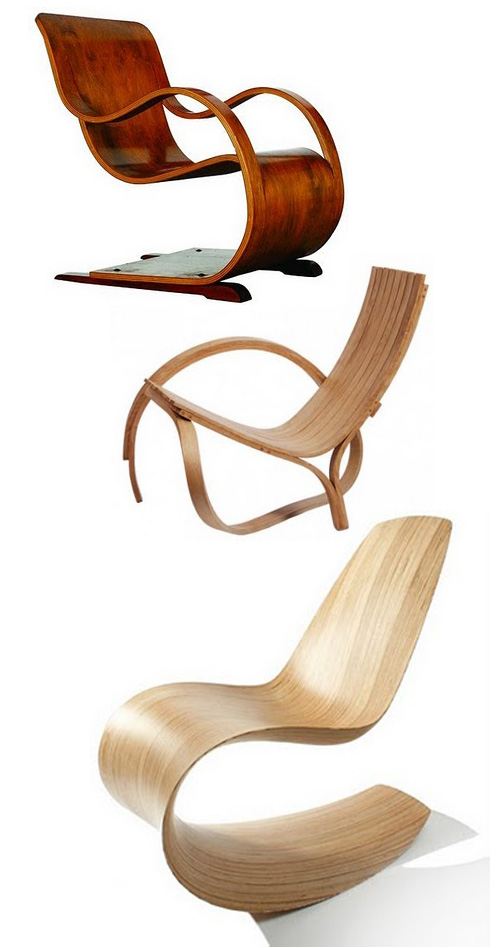 These Mid-century style bent plywood chairs seem to defy gravity flowing from one direction to the other, mimicking the movement in the waves. With post-war technologies allowing the bending and molding of materials in ways people never thought possible, these chairs represent a fusion of the machine-made and the nature-made in a unique way.  The unfinished and non-uniform wood exemplifies the beauty of nature while their shape and structure itself defies it. Just because we have one does not mean we have to deny the other, anything is possible.
Posted by Laura at 11:38 AM No comments: 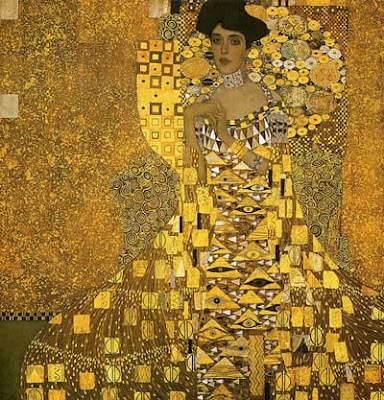 It is no secret to anyone who knows me that I am a lover of gold. Whether it be a sunlit room, an ornate gilded headboard or over-sized embellished earrings, gold gives a feeling of luxury and beauty. It is warm, decadent and bold and not at all understated. This painting, fiercely feminine in pose, excessively adorned and fluid in texture embodies this feeling for me. To be fearless, composed and utterly undeniable, that is to be golden. Decorate yourself, adorn your space or simply soak it in. 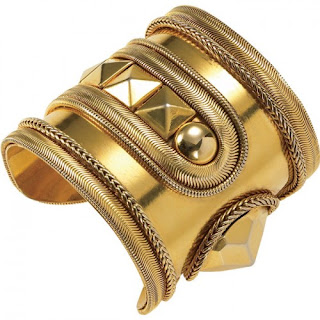 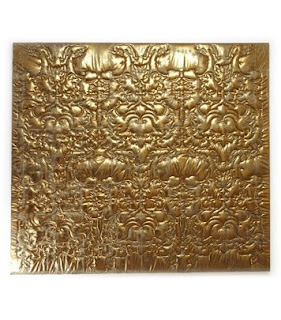 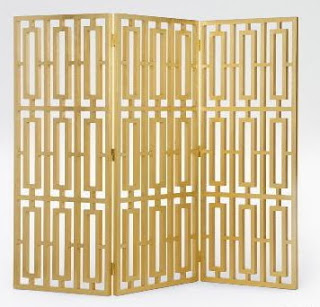 A gorgeous gilded gold cuff found on RocHouse Interior Design adds punch to any outfit. This incredible embroidered golden head board is done by Bo & Jangles and is unlike anything I have ever seen. You could create a whole room around it. Lastly the Tudor screen by Armani Casa screams modern luxury without being too overbearing. I'm in love with them all, but again, I'm a sucker for anything gold..
Posted by Laura at 10:36 PM No comments: 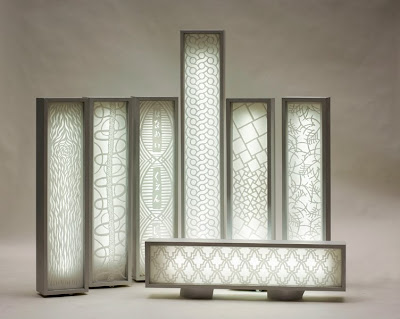 When I came across these works at the ArtXChange in Seattle by June Sekiguchi I was immediately drawn in. The scrollcut patterns range from iconic ethnic symbols to abstract expressions and yet without the light coming from within the box you wouldn't see the image on the plexi-glass at all, "the layers create textures of light and shadow that act as frames and screens that can enhance and reveal while also filter and obscure what is behind." (June Sekiguchi) It made me think of how we interact with eachother. In our adult lives we learn to only reveal certain parts of ourselves while concealing others in an attempt to protect ourselves. As a result we put less value in connecting with others and more on our own independence. But if we do not open up and let who we really are shine through, we won't connect at all. I've found connecting with others to be one of the most beautiful parts of life, my friendships are my most prized possessions and are a cure all for everything life throws my way. So though it may be a little scary to open up and let people in, life is far too short to keep the world in the dark. 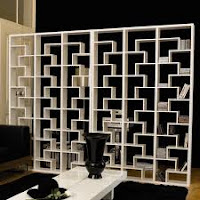 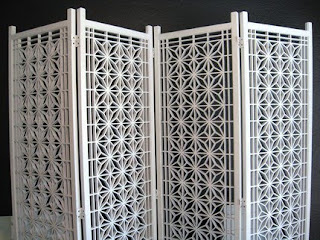 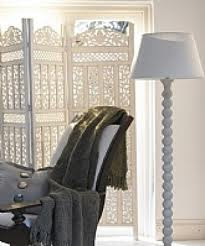 These graphic screens are a great way to divide a room while allowing as much light to shine through as possible. They add interest and texture in an unexpected way while providing a smaller, cozier space within and larger space. (Design-Milk, Fabulousness)
Posted by Laura at 10:09 AM 1 comment:

Beauty in the Broken

I cannot walk down Pike on Seattle's Capitol Hill without stopping to take in the work of Cassandria Blackmore. Her art speaks to me. The colors seem to create a constant motion, always with a sense of light from somewhere deep within. I am drawn in from afar by gorgeous masses of color and am instantly intrigued when I see that they are underneath layers of shattered glass. This juxtaposition proposes such a profound idea, so relevant to my life, I could stand in front of these works all day. How does something so utterly broken give such a sense of hope, inspiration and joy?

"We all have periods in our lives when we are shattered. Our ability to put the pieces back together makes us more beautiful and interesting."
-Cassandria Blackmore 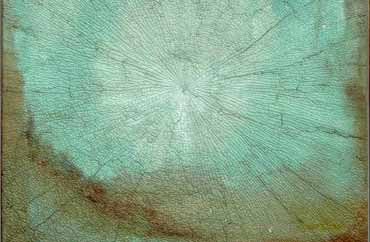 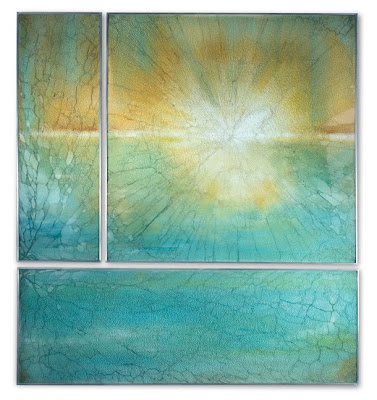 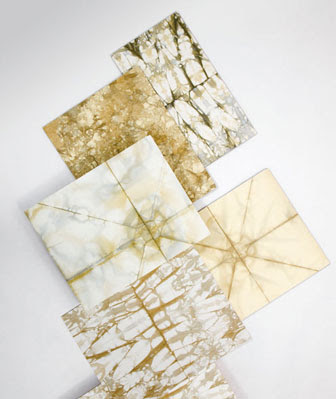 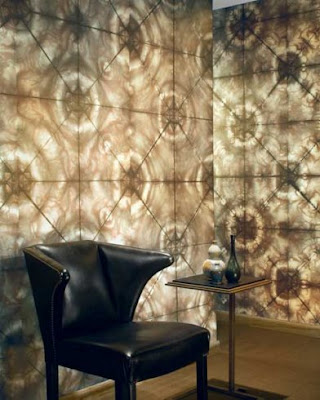 I fell just as quickly in love with this Tie-dye wallpaper by Maya Romanoff and Amy Lau. The subdued pallette turns a bohemian passtime into a chic and modern oasis. Perfect for a small powder room or entry way, the subtle imperfections enbody beauty in uniqueness, thus the name of the line "Snowflake".
Mayaromanoff.com 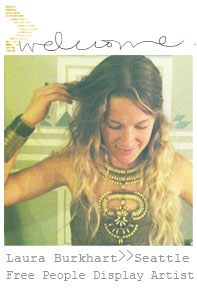